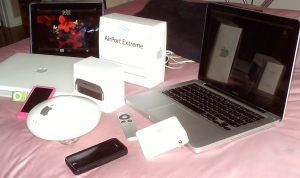 I’m so sad since hearing Steve Jobs is stepping down as president of Apple, Inc. It’s not like I personally know or worked with Jobs. But he has made a huge impact on my daily life for the last 22 years. His leadership, innovation and marketing, changed the way I communicate, listen to music and watch TV and movies. And Apple has been saving my ass since roughly 1988-89.

In grad school, when my Brother word processor died on me right in the middle of a paper I needed to turn in early a.m. the next day, my best friend Kim dragged me to the Apple lab on campus. There sat rows of tiny square all-in-one Macintosh Classics and Macintosh Plus’. It definitely wasn’t love at first site, but late that night began a lasting love for the little company that could. That sure wasn’t the last time I waited until 0-dark-thirty to work on a paper the day before it was due and Mac with a floppy disk drive saved my life. Knowing how to use a Mac was also a lifesaver during all the times I’ve been downsized, rightsized or whatever-sized. I could pick up a quick freelance or temp job, and work out of Kinkos doing desktop publishing and writing until I invested in a computer of my own. Even now, I rely heavily on my Apple devices all through the day and night. They don’t replace the human touch in my life, but sometimes it does feel like they don’t let me down as much as people do. I can count on them.

Everyday, I use seven of the 10 Apple products I own (yes, that’s right 10, not counting accessories 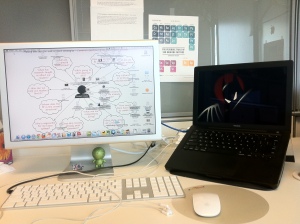 such as earbuds and cables). In addition to my Apple products, at work I use a black MacBook, Magic Mouse, keyboard and an old silver Apple monitor. I’ve even branded the Dell printer as an Apple thanks to the generous amounts of stickers they provide every time you make a purchase. I have never strayed. I’ve always owned a Mac–even when I had to really scrape together my last bits of money to buy such an expensive machine even when it was pre-owned. The first one I bought was the Macintosh LC 550. Then I got a Power Macintosh 6500. And then my first laptop–a Powerbook. Feeling the power of portability, I can’t imagine buying another desktop. My next Mac was an iBook and now a MacBook. Joining the computer family came the iPod Shuffle, iPod Touch, iPhone 4, and Apple TV. After getting hooked on wireless following the 2nd generation Airport base station purchase, I continued with Airport Express and Airport Extreme. The iPad Classic (as I call it) was won in a drawing at work. Lucky, lucky me!

During the east-coast earthquake we had earlier this week, the first things I grabbed to evacuate my office were my iPad and iPhone. I didn’t remember my purse or my company-issued Red Cross emergency backpack.

I feel a kinship with the company who stuck with its standards of quality over quantity, made aesthetics and function of a machine equally important and always thought about making something that would be practical and enjoyable for others to use. I remember wanting a Newton so badly and when telling others, they couldn’t understand why. Well, in a way, I finally got my Newton, except it’s an iPod Touch/iPhone and even better than I could imagine! But Steve Jobs did imagine it. And built a team of people to implement it.

The one funny thing about the statement in the resignation letter that Jobs can no longer perform the president’s duties is this: I bet what he deems as not being able to fully perform the duties of running Apple, Inc. is probably everyone else’s very best abilities doing the same job. He’s that extraodinary.

There was a night when all the stars and the moon and the planets were aligned just so to allow genius to happen. A fangirl like me can only hope for that cosmic event again.

Thanks Steve Jobs for being a visionary that changed my world for the better in many ways.