I like to picture Schmutt arriving in heaven being greeted first by the neighbor’s dog, Scooter, who died last year. Scooter, a Shetland Sheepdog, was always trying to get Schmutt’s attention. Schmutt would just kick dirt in his face. Always happy Scooter liked that rascal anyway. I also like to think my great Uncle Rufus, who was Schmutt’s original master, also welcomed him warmly.

Schmutt was a German Spitz with very human-like eyes. He loved a good butt scratch, and dancing around on his hind legs like a ballerina. Because of his size, many people seemed nervous about him at first glance, but he had a very mellow temperament. He was gentle with kids and didn’t start trouble with other dogs. Angel, the little dachshund girl down the street, was especially fond of him. As were the two German Shepard ladies in the yard behind the house. He also had a big fan in my former next door neighbor who looked forward to him visiting her on his daily walk. She always had a treat on hand for his visits.

Walking with him on the street, people often stopped to ask if he was a show dog. He had that show dog prance. With his curled tail held high he would often sashay across the room very gracefully. His favorite things were cold floors, people food and my parents. True to his breed, he had a way of herding us as if we were sheep when we were all in the house.

He took care of us for 14 years. He’s already missed. 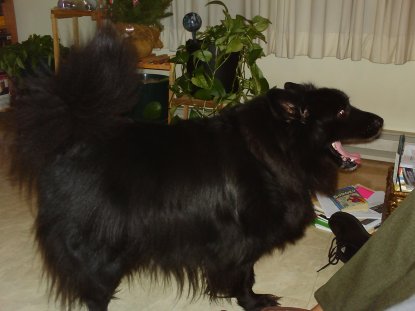