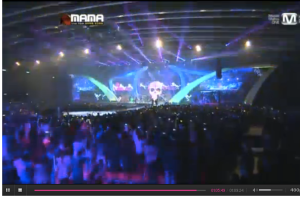 Lately I haven’t seen an awards show that I’m truly excited about. I keep watching them hoping to discover something new or see a performance that I’m excited about and still talking about (in a good way) days later. Like when I first saw Amy Winehouse perform and was trying to download her album before she was even finished singing. I no longer expect to see anyone singing live. To do so would be foolish. Everyone lip-syncs so as to not sacrifice choreography of the overall performance. So knowing this, I still was curious to watch the Mnet Asian Music Awards (MAMAs) just to see “live” performances of some k-pop groups.

It was frustrating not to be able to access the English-subbed version, but I really just wanted to see the live performances anyway, so the acceptance speeches didn’t matter much to me and I decided to watch the full segments I could find  in Korean with some presenters speaking in Chinese and English.

Hate Mental Hospital performance: Epik High’s performance of Don’t Hate Me was my favorite. Dressed as the Joker, Bane and Two-face, they were very entertaining–fun and a good concept that fit the song. It became my new favorite song. Watch it on Mnet.com.

Monster in Me performance: I’d heard some of Big Bang and G-Dragon’s music and had been wondering what the big deal was about this group, but after seeing them perform live, I get it. This performance felt like being at a concert. They put effort into the entire performance. Live singing, dancing, pyrotechnics. Actual instruments made an appearance. Lighting. Just like Epik High, they made you want to sing and get up and move. How the guy dressed in a Pepto-Bismal colored military outfit made that manly I can’t figure. The Overall presentation was far above anyone else who took the stage. The audience was genuinely into it.

You can see it on Mnet.com.

Time Loop 2012 with EXO (both K and M) and Shinee (two groups I like) was another strong performance. EXO doing their song “Mama” at the MAMAs, well you had to see that coming. When they performed a brief snippet of throwbacks from H.O.T., a 90s boy band I recently learned about watching from watching Answer Me 1997, and DBSK’s (TVXQ) the audience went crazy.

Beats Rocks The World: Oh yeah, the rappers in the house! And a Zico sighting. I was wondering why Block B, my favorite rap/pop group, wasn’t up for anything or performing. (Found out later they performed on the red carpet). Awesome to see so many rappers vibing off each other. And Zico holding his own with the more seasoned guys was fabulous. Double D’s smooth jazz rap flow, yes! Tap dancer and bass cello–hot. Rapper in the suit – hot. Really enjoyed Double K and Gaeko as well.

The Memorial of JYP: What??!! JYP dead? The hell? One of the big 3 entertainment labels in South Korea with ties to the US, thought I’d have read that on AllKpop or something. Oh wait, that’s him on stage–alive. A memorial? Okay this must be a lost in translation moment.

I liked that JYP (Jin Young Park) actually sang throughout his performance. It was refreshing. Even with all the hard dancing and choreography, he sang. I think many of the young performers should have learned something from that. Sometimes off-key, but really it was kinda nice–a nice change from perfectly polished trained boys. Also nice to see his protege young Jang Woo Young from 2 PM dancing together. Reminded me of them in Dream High 2.

Of course I gotta give PSY props for his Gangnam Style performance. Yes, I’m tired of the song now, but it still does get the crowd moving. And he actually sang for real at least on some parts.

Adam Lambert performing? Huh? As I told a fellow K-drama/K-pop fan, with all his makeup and costuming, I guess he fits in well in the K-pop world. Also B.O.B. singing his hit Airplanes with Korean pop stars So In Young and K. Willi instead of the gal from Paramore. And Dr. Dre introducing the JYP segment.

There was a K-drama soundtrack award and I was happy that several songs I actually bought after watching a drama were nominated. I guess my tastes of soundtracks isn’t so bad after all. Ha!

I was very surprised that I found myself rooting against a group that I’ve started liking, Super Junior, and I’ve bought several of their ballads. I know a couple of members are away in the military and one is working on a k-drama, but I was so disappointed in their performance. It felt like they were just phoning it in. All lip-syncing, watered down choreography from what i’ve seen on other shows. It was also annoying to me how the producers would repeatedly cut to shots of them during other performances and acceptance speeches just to elicit screams from the audience. Maybe it was just me, but some of the members seemed overly cocky.

Watching the reactions of other groups to their peers performing or winning awards was fun. From the hater faces to subtle shade to pure enjoyment and appreciation, I liked seeing it all. Even though the constant shots of Super Junior were irritating, a couple of times I really enjoyed watching their reactions when not realizing the camera was on them: Donghae bobbing his head to JYP’s performance of Gonna Make You Sweat; Shindong having what looked like an unpleasant reaction to Gain/Troublemaker; Yesung and Eunhyuk enjoying Epik High and Big Bang’s performance.

I really loved the Epik High members jamming to their label mates Get Your Crayon and Fantastic Baby (Monster in Me) performance. One member sitting in the audience with them and ripping off his mask. And Epik High jumping off the stage and buzzing  around SuJu (all in fun) was cool.

Here’s a link to watch the full show if you’re interested.