Whomever thought only 14 episodes would be enough for Plus Nine Boys (PNB) should be fired. Or at least yelled at by all the viewers. Finally a really good story that had all the ingredients to actually be a longer production without having any filler scenes or episodes, and it isn’t even given the typical 16 episode run. Bad form whomever programmed or green-lighted this decision. Even worse the show’s run wasn’t extended when some of the worst series (like Love Around) have been and then still don’t make good use of their extensions!

Us Americans who grew up on a diet of Schoolhouse Rock know all about number nine’s naughtiness. In Korea, there’s a common belief that anything plus nine (gu in Korean) is always cursed and brings about more problems than usual, totally bad mojo. So the ninth year of every decade in a person’s life is pretty much going to be a sucky one. That’s the situation for our main characters: Uncle Goo Kwang Soo age 39 and his older sister’s children: Kang Jin Goo age 29, Kang Min Goo age 19, and Kang Dong Goo age 9. The year ending in 9 is going to be a rough one for them romantically. Yup, even for the 9-year-old.

Pretty much everything about this show was good. The romantic rough patches for the nephews were very age appropriate. From the 9-year-old who experiences first heartbreak because he discovered too late that he liked the girl who had a crush on him to the 19-year old who has put a girl on a pedestal with all of the idealism and completely unrealistic vision of  that age.

The 29-year-old realistically portrays a former playa who has had his fun but is now ready for a serious relationship. He’s arrived at the stage where he clearly sees the flaws and quirks of the woman he loves and loves her all the more anyway. The 29 year old is the only one who sees the woman he likes for who she really is and is fine with it. Although he likes this version that gets dolled up in make-up, heels and a dress, he genuinely liked the ponytail-wearing, eating like a pig, sneaker-wearing girl just as much. They instantly became my favorite couple.

Related to 29ers story is Jin Goo’s college friend/classmate now coworker, Park Jae Bum and he has the best introduction of a side character, ever.

Jin Goo voiceover: “Whether he’s happy or sad, he has a chic and rough face expression.” MoTae-Solo for 29 years. Never dated since birth.” Awesome. 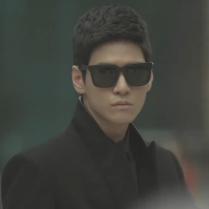 And here is our first glimpse of this chaebol son. You’re welcome for the gratuitous eye candy. 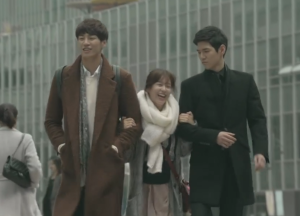 And so begins the triangle romance where two friends like the same girl and they all work together at the same job. Oh noes! I’m rooting for Jin Gu and Se Young, although my heart breaks for ma-tae solo. He’s so cute and sweet. And we finally got a wisp of a smile from him later on. B-guy syndrome sufferers, we can only hope for the Dream High scenario. 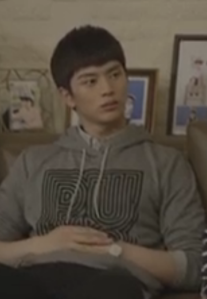 Min Goo, ah, I really like his pairing with Bong Sook, but he has got to let go of his idealized version of who he wants as a girlfriend and love her for who she is or let her go. It can’t change every time you learn something new about her or 10 mins after you’re all let’s just be 100% honest. Accept her for the independent, rowdy diamond in the rough woman that she is or go off and find some meek, virginal wallflower fairy. (Good luck with that).

I know 19 year old means well. But I can’t stand a guy who places an idealized fantasy on you and is too wrapped up in the fantasy to actually get to know you for who you are. It’s understandable at 19, not so much at 39.

The thing about 19/20-something year old guys is if they put you on a pedestal, once you fall off it you’re doomed. The balance of power in the relationship shifts and he won’t be able to view you the same every again. 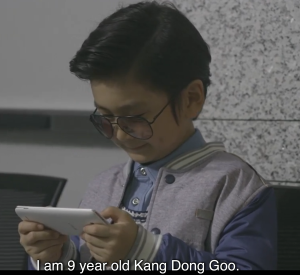 Who can’t love cute kid crushes. Dong Gu was coasting along in life already a celebrity mobbed by kiddie fans at this school and wins every audition he goes to. His income affords his whole family to buy a nice apartment in the city. His classmate has a crush on him until one day tired of his ignoring her she falls for his acting rival and new classmate Do Min Joon. (Oh yeah, same name as the alien in My Love from Another Star And same cocky confidence and competence).

This guy is still single. He finds and falls in love again with the woman who viciously and publicly broke up with him. I’d like to feel sorry for Kwang Soo, but not once has he asked Da In directly how she feels about him and heard her say it out loud. So if you run off on your own and decide you’re going to ask someone to get married AGAIN before you confirm the feelings are two-way then you’re on you own for just assuming. He hasn’t changed from when they dated before. And she really hasn’t either. She makes a good point about now having to think also for her child, not just herself now. And he just cavalierly glossed right over that and kept on with his own thoughts and wants. They are not a match whether the Noona approves or doesn’t. I was very against this romance and didn’t really enjoy them at all.

Note: I hate public, grand proposals, but I don’t think I’d beat a guy or break up with him for doing it. Yeah, I said vicious, public humiliation of a break up.

Even though this show didn’t have a lot of original music, the song selection was warm and always seemed to fit the scene down to the lyric. For example, whenever Jin Goo is listening to Ma Se Young a song that repeats the single lyric “pretty” plays as he gazes lovingly at her. As she obliviously chatters on. When he’s trying to decide if he should pursue her the lyrics in the song playing are “you’re my green light”.

I’m definitely not a fan of Da In (or her dress like an elementary school kid outfits), but Kwang Soo also shares responsibility for this disastrous pairing. She’s a person that processes things internally and is slow to speak. He should know this about her nature so that when she does try to speak up, he needs to listen. From her standpoint maybe his stubbornness and need to defy his sister on his dating choice look like his motivation for sticking with her right now. Or he’s only thinking of the good times fantasy. (I don’t think that’s it but I could see where she might.) Why the need to rush into marriage? He should consider that she just got divorced and probably should not be rushing back into marriage. Maybe she just isn’t ready even if she likes him a lot. He doesn’t even have basic info of where is Eun Soo’s father and what that relationship is about. (Nor do we viewers!)

The character Da In was so unlikeable. Even as we discover she is a reserved, introvert who had increasingly grown frustrated by 39. Her silence on the issue of why she harshly beat down a man asking her to get married was frustrating. And continued to be as it lasted most of the 14 episodes. Okay I’ll be nitpicky, I also couldn’t stand her outfits. They were either elementary school girl style or 1950s sock hop attire. Ugh! I may have disliked it but I admit it at least fit her conservative nature. We don’t know where she comes from or what she’s thinking most of the show.

Which brings me to her love interest Kwang Soo, age 39. The longer I watched this show, the more I could see why Da In would get annoyed. 39 annoyed the heck out of me. When he finally got some get up and go to pursue Da In his long lost love all he does is talk on and on about his thoughts, his wants, them in the past–he barely paused to allow her to speak at all. So it’s no surprise that he’s sitting in a coffee shop waiting for hours to propose again and she’s a no-show. He was going propose again never having asked her, a recently divorced woman with a child, how she feels about him and remarrying in general. Who does that? I felt the whole time this was not a match and once he received the explanation from her of why she dumped him originally, he should have moved on to find happiness. I felt like he was similar to his nephew 19 in that he was placing his idealized version of Da In on her, not seeing her as she was or taking time to slow down and listen to her. I didn’t hold any hope out that he would learn that she is a slow person and needs time to get words out. In the end they are happily playing house, but it was really the only part of the show I didn’t like much.

This whole relationship also made 39’s Noona, the mother of his three nephews become a shrill woman. All of her fussing before was more humorous and living among four males requires some level of fussing. But the caring woman who helps 9 rehearse his lines and wants 39 to get married, because this mean person who is strongly against 39 marrying a divorcee with a child.

Where is Da In’s ex-husband, what is the relationship like. How long was she divorced?

If you love slice of life, family dramas that feel real or romantic comedies, Plus Nine Boys is one you’ll want to watch. And maybe even rewatch those times when you need a little comfort food.

One thought on “Plus Nine Boys Review ***SPOILERS***”